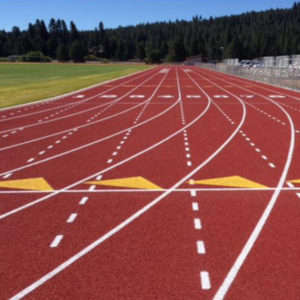 The Truckee High School Track upgrade included the replacement of the existing track with a synthetic track surface, new restrooms, bleachers, and ADA compliant accessibility throughout. AEC tasks included storm drainage and water quality treatment for the new track as well as design and reconfiguration of three existing parking areas, drive aisles, walkways, and utility connections to the new restrooms.

Pickleball courts in the Squaw Valley Park used to consist of two courts established by local residents utilizing an overflow parking area. The past five years have seen an explosion in the popularity of the sport. AEC was retained by Placer County Parks Division to design new pickleball courts for an expanded facility. An analysis matrix was completed that ranked various features of three alternative sites and configurations. AEC designed three new courts that were constructed in 2016 at Squaw Valley Park. 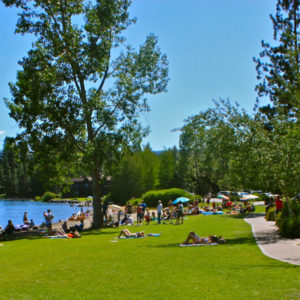 The project included a complete refurbishment of the park area. This involved upgrading the playground to meet current safety standards; relocation of the restroom building to a more accessible location; reconstructing the sewer pump station and force main; highway streetscape improvements including removal of existing boardwalk and railing, installation of a depressed walkway surfaced with concrete pavers and cable railing. Beach improvements included placement of 12,000 cubic feet of imported sand in former grassed areas. Shoreline stabilization was necessary to protect the beach, and a dynamic rock revetment was designed to mimic natural conditions. Other work included restoration and stabilization of the steep slopes and existing foot trail, providing ADA access to restrooms, interpretive displays of Tahoe history, a picnic terrace area and overlook areas, and a reconstructed parking area with advanced stormwater BMP’s due to proximity to Lake Tahoe.

Martis Valley Trail is a paved, multi-use recreational trail, that connects the communities of Truckee and Northstar, and ultimately the Lake Tahoe Basin. The 9+ mile trail begins near the southern limits of the Town of Truckee, crosses through Martis Valley, and ends near Sawmill Flat Reservoir at a junction with Forest Route 73 (AKA the Fiberboard Freeway), allowing connection to Tahoe’s north shore. AEC worked with the environmental consultant to complete an equal-weight CEQA analysis of two project alternatives. Multiple resource areas required bridge/boardwalk crossing evaluations to minimize impacts. 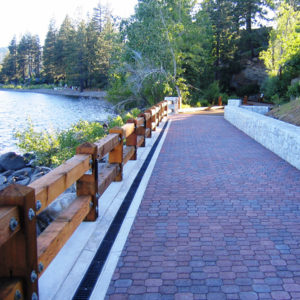 The Lakeside Trail is a one-mile segment in the largest paved trail system at Lake Tahoe, connecting the North Shore, West Shore, and the Truckee River and Squaw Valley. This segment courses through the core of Tahoe City in close proximity to the Truckee River and Lake Tahoe and was developed in seven phases due to its complexities. Water quality and coverage mitigation strategies were successfully implemented throughout the trail and allowed for enhanced restoration of areas that had been previously disturbed. Managed public access and friendly barrier features have kept users on the trail and away from sensitive areas. Major utility upgrades and relocations as well as storm water treatment facilities and source control measures on and off site were key benefits of the trail. 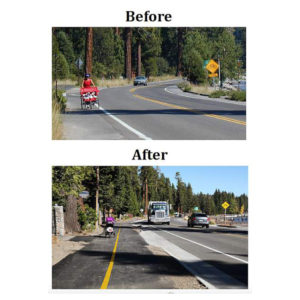 The Homewood Bike Trail is a 0.9-mile paved trail along SR 89 that provides the once-missing link within a 9+ mile path leading users between Squaw Valley, Tahoe City, and now the beautiful west shore of Lake Tahoe. Bike path travelers can now safely explore the beaches, access hiking/biking trails and campgrounds, and journey as far as the Meeks Bay Campground. AEC provided topographic and design surveys for this TRPA Environmental Improvement Project (EIP), as well as regulatory permitting for the trail with TRPA. The topographic survey involved coordination with Placer County and Caltrans in connection with the Homewood/SR 89 erosion control project. 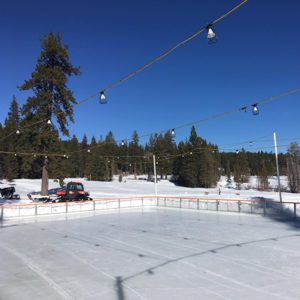 The Tahoe City Winter Sports Park is a recreation concession provided by Tahoe-XC for the TCPUD on the Tahoe City Golf Course and adjoining property. The Winter Sports Park offers cross-country skiing, snowshoeing, sledding, and ice skating during the winter. The outdoor seasonal ice skating rink was built in 2016, expanding the winter recreational opportunities. AEC provided planning, design, and permitting services for the project. 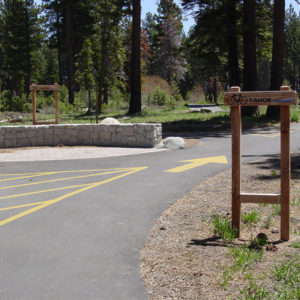 The"64 Acres" site was once a trailer park that the U.S. Forest Service wanted to return to a more natural setting. Our job was to design and oversee construction of a new recreational facility that would not only be functional but beautiful. The site also had to be designed with flood and erosion control in mind to protect the scenic and environmental quality of the adjacent Truckee River. 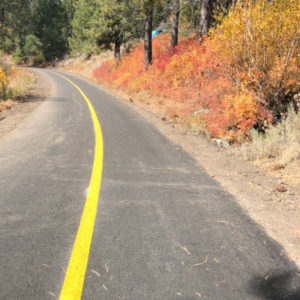 State Route 89 between Squaw Valley Road and Tahoe City was reconstructed by Caltrans during the summer of 2010. The project has included several vehicle pull-outs along the highway, which, in turn, have become heavily utilized for recreational access to the Truckee River and the Truckee River Bike Trail. However, there was no direct or formal access to the adjacent bike trail or river from the pull-outs. As such, informal access was occurring at multiple locations causing safety concerns as well as erosion between SR 89 and the bike trail. AEC provided survey, civil design, permitting, and construction inspection services for the implementation of permanent BMPs and improved access.

The Lake Forest Public Boat Launch is operated by the Tahoe City Public Utility District. The project was to replace the existing ramp and restore it to its original elevations. Sediment accumulation and deterioration have resulted in structural failure of the ramp. AEC was the prime consultant providing overall coordination for the rehabilitation project. Services included design and regulatory permitting for the replacement and widening of the boat ramp in accordance with the California Department of Boating and Waterways’ design standards, and dredging of lake access to the previous dredged elevation of 6219’ to enable boat operation at lower lake levels.